Dr Zayd Ratansi on HealthClick Here to see the Video

The present study was designed to evaluate the effects of Orodietology on cellular nutrition and protection. This study was conducted on HaCaT cells (a cellular line of human kératinocytes).

The first one is indispensable for the second because toxicity on cells would pull artefacts and bad interpretation of the results for the oxidative stress. Besides, the first part is going to bring arguments on the interest of products as effects on the growth and absence of toxicity.

In the first part of the study, HaCaT cells were incubated with ß-Méditril®, A40 Redox Anti Age, Vitamin E (reference) or with anything (control) during 24 hours. The determination of the cell viability is obtained by the MTT method.

Results did not show any cell toxicity in all the tested concentrations. On the contrary, ß-Méditril® and A40 Redox Anti Age stimulate the cell growth and this stimulation was observed on a wide range of concentration. 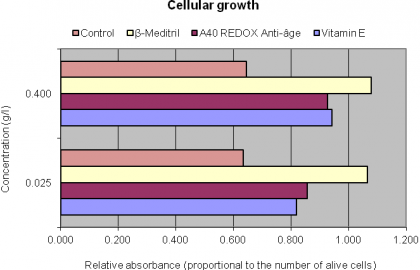 In the second part of the study, cells were incubated during 24 hours with ß-Méditril®, Vitamin E (reference) or with anything (control) in the presence of a determined concentration in H2O2 (inducing an oxidative stress). The determination of the antioxidant protective effect is obtained by using the DHR 123 probe.

Results showed that ß-Méditril and vitamin E reduced of half the oxidative stress engendered by H2O2; the antioxidant effect of ß-Méditril® is superior to the one of vitamin E, which requires more raised concentrations to produce a similar effect.